The project consisted of site improvements for Canton, OH’s first fully functional hydrogen fueling station for the Stark Area Regional Transit Authority (SARTA). The project began with a seven bus fleet of cutting-edge and environmentally friendly hydrogen buses and was the largest hydrogen station outside the state of California. Like SARTA’s compressed natural gas (CNG) station, the hydrogen station is open for public use.

SARTA’s hydrogen station at the ready

The Stark Area Regional Transit Authority has completed its hydrogen pumping station, which was under construction for much of 2016.

After the Oct. 10 opening of that hydrogen pumping station, it has one hydrogen bus in the garage that it unexpectedly got from the University of Alabama about two weeks ago, said the agency’s executive director, Kirt Conrad.

The school no longer wanted the bus. SARTA will allow students in Stark State College’s technician program to work on it. It will go into service next month.

In addition, because it’s one of the handful of public transit agencies in the country to use hydrogen fuel-cell technology, which propels buses without any emission of pollutants, a non-profit group Center for Transportation and the Environment has decided to hold its International Zero Emission Bus Conference and Fuel Cell Bus Workshop on fuel cell buses in Canton, said Conrad, who has said the buses only emit water. He attended this year’s events in London a few weeks ago. Conrad said London has about 10 fuel cell buses.

Conrad has said the benefits of the hydrogen buses are cleaner air and encouraging the development of a hydrogen fuel cell industry in Ohio.

Another hydrogen bus that will join SARTA’s fleet is on loan to Ohio State University in Columbus for use as a demonstration vehicle. It was in Canton for a few months after being delivered in May where it was demonstrated at SARTA’s transit stations, Canton City Schools and Stark State College, said Conrad, where local public elected officials rode the bus. SARTA’s third bus is at Penn State undergoing reliability tests by the Federal Transit Authority.

ElDorado is the buses’ manufacturer, which is installing an electrical drive train from BAE Systems and a Ballard Power Systems fuel cell on each vehicle.

Five more hydrogen buses are on order, with one arriving each month starting in January. Conrad expects SARTA to have 11 hydrogen buses by the end of 2017. They now each cost about $1.4 million, nearly all of the purchases with the cost of the hydrogen station are being funded by more than $25 million in grants by the federal government, which is seeking to promote zero emission technology. Conrad said the cost is $600,000 less than the cost of each of the first two buses when fewer buses were being made increasing the per-unit costs.

He said the new hydrogen buses will allow SARTA to take out of service at least five buses that are over 500,000 miles and are in need of replacement.

As for the approximately $1.9 million hydrogen pumping station at SARTA’s Gateway headquarters in southeast Canton headquarters, it’s operational, said Conrad. A 9,000-gallon tank holds liquid hydrogen at extremely cold temperatures. A vaporizer converts the liquid hydrogen into gas where it’s stored in underground tanks and then it’s pumped into the hydrogen buses with fuel dispensers. The pumping station can support up to 20 vehicles. A bus can hold 50 kilograms of gas. The hydrogen is shipped from Air Products’ hydrogen plant in Ontario. 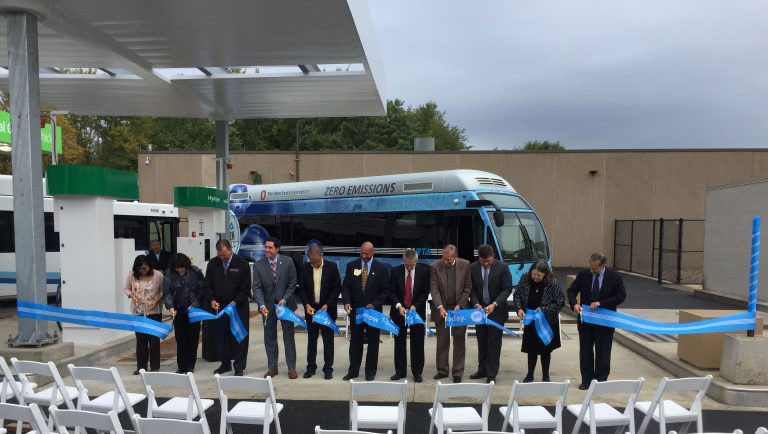 The federal government is making a $25 million bet on hydrogen fuel cell technology in Canton. As part of that investment the largest public transit hydrogen pumping station outside of California is scheduled to open late next month.

After a ground breaking in January, local contractors earlier this week at SARTA’s headquarters installed a 9,000-gallon tank that will hold liquid hydrogen at a temperature of 273 degrees below zero before vaporizers convert it into gas. On Wednesday, they were installing underground power lines and gas lines that will carry hydrogen gas to a dispensing unit. “This has been a long slog and a lot of hard work for us to get here,” said Kirt Conrad, the executive director of the Stark Area Regional Transit Authority. Conrad, who’s sought since 2013 federal funding for SARTA to use the hydrogen fuel cell technology, said the cost of the hydrogen pumping station, which can dispense about 300 to 400 kilograms a day and will have the capacity to expand, will be about $1.9 million, nearly all from federal funding. The share that came from local sales taxes was less than $100,000, he said.

The biggest benefit of hydrogen fuel cell buses: they emit nothing except water, said Conrad. And while compressed natural gas is less polluting than diesel fuel, CNG engines still emit some pollutants, and hydrogen is more than twice as fuel efficient than CNG and diesel engines. Electric buses are also zero-emission vehicles, but they have to be recharged every hour to two hours. But hydrogen, which currently costs about $4.63 a kilogram, for now, provides no fuel savings due to the plunge in oil prices the past year.

If this experiment in Canton is a success, then the results could be cleaner air, more adaptation in Ohio and nationwide of hydrogen fuel cell technology to help accomplish the goal of zero-emission vehicles, the establishment of a vehicle hydrogen fuel cell research program at Stark State, and the development of a local fuel cell industry that would result in more high-paying jobs.

“I think this is the beginning of an infrastructure in the state of Ohio we don’t have at this point, and I think we will have (it) once people see the success of the buses,” said Valente, who added that if hydrogen fuel cells are increasingly used then Ohio with its intricate supply chain for automotive and aerospace would stand to benefit.

Conrad said when the station is opened around Sept. 26th, SARTA will be able to borrow for up to a month a hydrogen bus that’s now part of a year-long demonstration at Ohio State University. OSU will turn over the bus at the end of the demonstration in May. A second hydrogen bus, now undergoing dependability tests by the Federal Transit Administration at Penn State University, will be delivered by January. These buses cost $2.5 million each, covered by federal grants.

SARTA now has on order another five hydrogen buses, which will be delivered between January and June. With a larger order, the cost per bus is about $1.9 million, again, covered by federal grants. And SARTA plans to order at least three buses after that, Conrad said. The fuel cell itself once cost $500,000, but with the greater economics of scale, the cost is down to $350,000, and he believes the cost for hydrogen buses could someday drop to about $750,000.

Conrad said the FTA was eager to test the deployment of hydrogen fuel cell buses outside of California where a couple of transit systems there use them. SARTA being a medium-sized transit system would make Stark County an ideal place to test the technology in a colder climate rather than in a more complex, larger transit system such as Cleveland, New York or Chicago, he said. And SARTA had been among the first to use compressed natural gas buses.

He said about 10 to 15 transit systems in the U.S. use hydrogen fuel cell technology.

“I think ultimately over time, they want to move all transit vehicles to a zero-emission platform,” Conrad said. “They’ve found deployment of new technologies are easier within smaller agencies, smaller communities.”

Conrad said the liquid hydrogen, which is easier to transport than gas, will be shipped from Air Products’ hydrogen plant in Sarnia, Ontario, near Michigan. The plant extracts the hydrogen by using electricity produced with natural gas or hydropower, he said.

SARTA’s chief said he’s in discussions with a Stark State engineering professor about establishing a research program at the college that studies hydrogen fuel cells that would be funded in part by a $1 million federal grant.