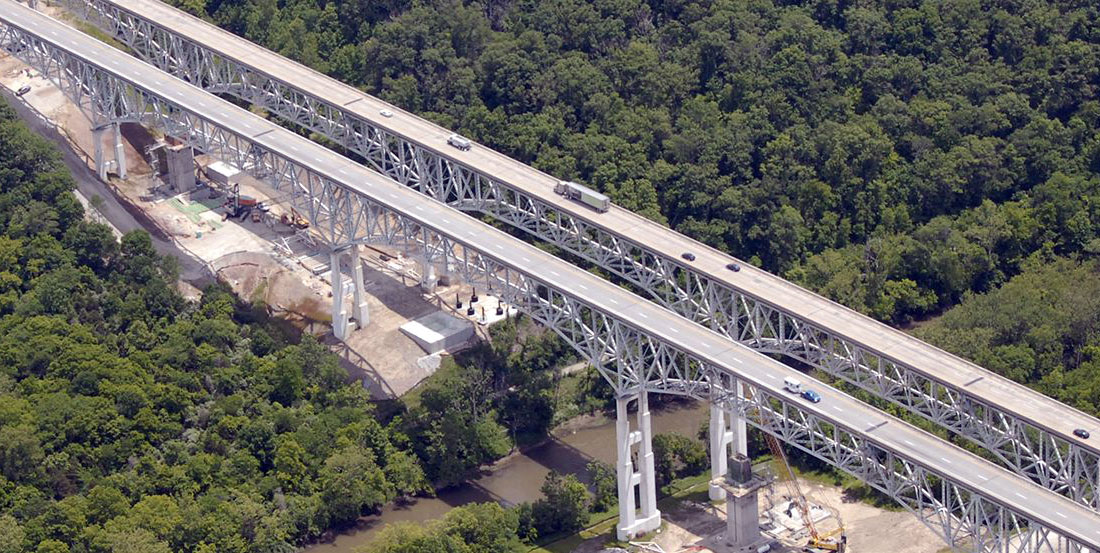 Omnipro Services was selected to provide Comprehensive Construction Support and Construction Site services for the Ohio Department of Transportation for the Jeremiah Morrow Bridge Replacement Project. This project replaced the existing deck truss bridges with a concrete cast-in-place segmental box structure using the balanced cantilever method of construction. This $88.1 million project was completed in the summer of 2017.

The new bridges consist of segmental boxes that have multiple 440 foot spans which cross the deepest part of the valley, nearly 300 feet in height. The total length of the new bridges is about 2200 feet. The segments are approx. 55 feet wide and the new cross-sections were configured as four 12 foot lanes and narrow shoulders.

After six years of construction, traffic is once again moving on the Jeremiah Morrow Bridge, a section of Interstate 71 that spans the Little Miami River connecting Cleveland, Columbus, and Cincinnati in Ohio. Limaohio.com reports that state transportation officials expect the project to be completed within the $104 million budget.

“The completion of this project will have an enormous benefit to Ohio,” Ohio Department Of Transportation (ODOT) District 8 Deputy Director Tammy Campbell said during a ribbon-cutting in November, according to the news agency. “Pulling this project together was an enormous undertaking, and its efficient completion is a tribute to our project team.”

Construction to replace the bridge, Ohio’s highest bridge at 239 feet above the river, began in June 2010 and has employed 50 to 80 workers. The construction contractor, Kokosing Construction, will receive $88 million for the construction.

The project has prepared the bridge for the widening of the interstate. “That’s probably the most significant aspect of the bridge,” Warren County Engineer Neil Tunison told the news agency.

“The new structures will help to keep people safe and commerce moving in Ohio,” said ODOT Director Jerry Wray, according to the news agency. “They will serve the people for several decades.”

Contractors are continuing to put finishing touches on the project, which are expected to be complete in May 2017. Once complete, the rest area just north of the bridge will reopen.

As of Jan. 11, concrete and steel sections of the old bridge were being cut away and removed.

A celebration Tuesday, as a replacement for the northbound span of the Jeremiah Morrow Bridge prepares to open to traffic. It’s the first of two new spans that will carry traffic on I-71 over the Little Miami River. Larry Davis was there for the ceremony.

After three years of construction, traffic will begin using the stretch of the Jeremiah Morrow Bridge Wednesday morning. The first phase is now complete. ODOT officials as well as state and local leaders cut the ribbon for the official opening of the new span.

Over the past few years, there have been a lot of traffic delays and a lot of construction work on this new I-71 span, which at 239 feet high is the tallest bridge in the state of Ohio. Completion of the bridge will allow commerce to continue to flow through southwest Ohio. The new bridge is designed for so-called super loads, which the old bridge was not.

The bridge construction method is different from most. Dan Mendel with ODOT explains. “What’s unique about this one, is how we built it. We build all of our piers up and then we build our super structure out like a big teeter totter, one big balanced bridge. We build all the piers up and we put all the sections out together like a balanced teeter totter and then we connect them all together. That’s a unique way of building this type of bridge.”

The current north span will be torn down to make way for the southbound span That should be completed in 2016.

The Ohio Department of Transportation chose Omnipro Services to replace the the aging Jeremiah Morrow Bridge, located between Columbus, Ohio, and Cincinnati, with the $88 million set aside from its fiscal budget.

The I-71 Bridge, which serves 60,000 vehicles a day with two lanes going each way, is still safe but cannot support trucks over 120,000 lb, according to Associated Press reports. Omnipro will work on replacing the existing deck truss bridge with a concrete cast-in-place, segmental box structure using the balanced cantilever method of construction.

The bridge has undergone major rework since its inception in 1965 because of significant slope failures. According to Omnipro, the construction is complicated and demanding because of the bridge’s steep embankments and lack of roadway systems underneath. Construction is expected to be finished in four years and will not hinder traffic in either direction, a state official told the AP.

According to the National Home Builders Association, the average home size in the United States in 2004 was 2,330 Square Feet. There is more than enough concrete in a single footing to fill an entire average size house full from floor to ceiling.

A single concrete footing with reinforcing weighs approximately 2.8 Million Pounds. This is equivalent to 170 of the largest species of elephant known today weighting roughly 8.4 tons each.

If a full size drawing could be printed of Pier 2 from the top of footing to the top of deck, it would stretch 80 yards across Ohio State's football field.

There is a total of approximately 3,100,000 lineal feet of strand to be installed in the two bridges combined. This is equivalent to 585 miles, or enough to stretch from Columbus, Ohio to Atlanta, Georgia.